Studies have shown that chlorogenic acid has anti-aging properties

How to fight aging may be a topic that everyone is concerned about, and it is also the content that relevant researchers have 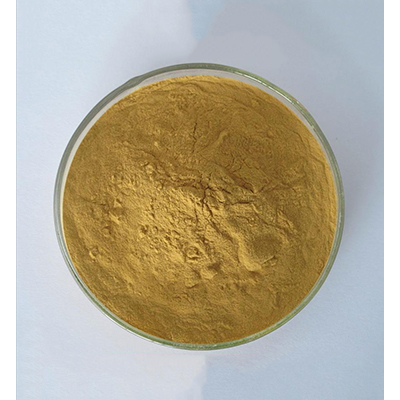 been working on. With the increasing trend of population aging, more and more attention is paid to diseases related to aging. The discovery of the mechanism of aging and the search for anti-aging drugs or compounds have also become a major topic in the field of aging research.

Recently, there is a research result that may provide people with a new idea to resist aging-the use of chlorogenic acid. The team of Luo Huairong, a researcher at the Kunming Institute of Botany, Chinese Academy of Sciences, discovered through research that the chlorogenic acid present in a large number of plants has an anti-aging effect. Relevant research results have been published in the international journal "Journal of Gerontology (Biomedicine)" recently. Can extend the lifespan of Caenorhabditis elegans When it comes to chlorogenic acid, some people may be familiar with it. Chlorogenic acid has a wide range of biological activities, and modern scientific research on its biological activities has penetrated into many fields such as food, health care, medicine and daily chemical industry.

Chlorogenic acid has a wide range of applications

Chlorogenic acid exists in a large number of plants, such as tea, coffee, honeysuckle, etc. It is one of the effective antibacterial and antiviral pharmacological ingredients in many Chinese herbal medicines and natural products. In previous scientific studies, researchers have discovered that chlorogenic acid has a wide range of effects such as antibacterial, antiviral, white blood cell enhancement, liver protection and choleretic, anti-tumor, lowering blood pressure, lowering blood lipids, scavenging free radicals, and exciting the central nervous system. . However, the effect and mechanism of chlorogenic acid on aging have been unclear.

"Tea and coffee are the most widely used daily beverages in the world. People have conducted extensive research on the physiological functions of these two substances. We conducted literature research and found that the common component of tea and coffee, chlorogenic acid, has anti-inflammatory effects, and It has a preventive effect on aging-related diseases. Therefore, we infer that chlorogenic acid may have an anti-aging effect." Luo Huairong told a reporter from China Science Daily.

After a systematic study, the findings of Luo Huairong's team confirmed the original conjecture that chlorogenic acid can extend the lifespan of wild-type C. elegans by 20.1%.

How does chlorogenic acid achieve this anti-aging effect? Luo Huairong's research group found that chlorogenic acid can act on the insulin signaling pathway, reduce the phosphorylation level of AKT, activate the expression of the transcription factor DAF-16 and its downstream genes, and increase the resistance of the nematodes to external stress environments, thereby prolonging the lifespan of the nematodes.

DAF-16 gene is a lifespan regulator. Previous studies conducted by scientists on laboratory worms have shown that the DAF-16 gene is closely related to longevity and immunity.

According to Luo Huairong, human aging is characterized by the gradual loss of physiological integrity, which leads to impaired function and increased vulnerability, and ultimately leads to death. This deterioration is a major human disease, including major risk factors for cancer, diabetes, cardiovascular disease, and neurodegenerative diseases.

"In recent years, aging research has experienced an unprecedented progress, especially the discovery that the rate of aging is controllable, and the genetic pathways and biochemical processes of aging are conservative in evolution." Luo Huairong said that the aging of different organisms has common signs. Sexual characteristics, such as genome instability, telomere depletion, epigenetic changes, loss of protein homeostasis, deregulated nutrition induction, mitochondrial dysfunction, cellular senescence, stem cell depletion, changes in intercellular communication, etc. A major challenge in aging research is to analyze the relationship between these signs of aging and their contribution to aging, and finally to identify drug targets to improve the health of the human body during the aging process with minimal side effects.

Chlorogenic acid can prolong the lifespan of Caenorhabditis elegans. Does this mean that it will also have an effective effect on human anti-aging? In this regard, Luo Huairong explained that because the mechanism of aging is now considered to be very conservative, that is, the regulation of aging signals among different species such as yeast, nematodes, fruit flies, mice, and primates is basically the same. Therefore, the research results on nematodes have a good predictive effect on humans. "Of course, the real effect can only be confirmed through rigorous clinical trials."