Is stevia a healthier alternative to table sugar?

The difference is that some are natural sweeteners derived from plants, while others are synthetic, such as sorbitol and aspartame, which are commonly found in latiao.

Aspartame enters the body and is quickly metabolized into phenylalanine, aspartic acid and methanol, all three metabolites that can cause harm.  (But aspartame is used in so little food that it does little harm and may be overused by some unscrupulous vendors.)

Natural extracted sugar substitutes mainly include erythritol and stevia, etc. Stevia has attracted more and more attention in recent years and has been used more and more in the beverage industry, such as the stevia flavor developed by Coca-Cola.

Low sugar, low quantity of heat has become the consensus of the global consumers and food industry, even the beverage giant Coca-Cola also had to be on the choice of sweeteners, constantly updated, only to reverse carbonated drinks "sugar" label, natural sweeteners in low quantity of heat, high sweetness in the process of exploring, the emergence of stevia sugar seems to be a ray of hope for the food industry. 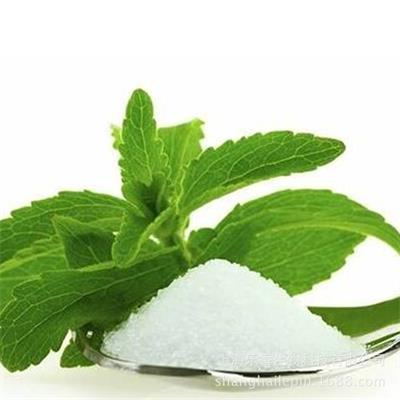 With the development of modern plant extraction industry, stevia derived healthy sweetener products are more and more popular in the market, becoming the "popular category" in the field of sweetener according to statistics, by the end of 2016, the number of food and beverage products containing stevia has reached 3223.

Stevia sugar is derived primarily from Stevia leaf extract.  When stevia is mixed with sucrose fructose or isomerized sugar, its sweetness and taste can be improved.  Can be used in confectionery, cakes, drinks, solid drinks, fried snacks, seasonings, preserves.

Domestic consumers are not familiar with stevia. Although most consumers know that high sugar in drinks is not good for health, they are still unfamiliar with stevia, a healthy sweetener.  At present, stevia is mainly used as medical sweetener in China, which is used as drug icing and flavoring agent.

However, the use of stevia by well-known domestic beverage companies has gained consumers' favor in the market.  The main reason is stevia's sugar properties.

Stevia sugar is not only high in sweetness, but also low in calories and has certain pharmacological effects.  Stevia sugar are the treatment of diabetes, blood sugar control, lower blood pressure, anti-tumor, resisting diarrhea, enhance immunity, promote metabolism, and so on, to control obesity, regulating stomach acid, restore nerve fatigue has a good effect, also has significant curative effect for heart disease, pediatric dental caries and so on, the most important is that it can eliminate the side effects of sucrose.

Stevia sugar is a natural sweetener that is not absorbed by the body and does not produce calories. It is suitable for people with diabetes and obesity.

Stevia sugar is recognized by the international community as the "third generation healthy Sugar source" and the "best natural sweetener", and has been recognized by relevant regulations.  In the Chinese beverage industry, Xiaoming Classmate and Nongfu Spring's Tea PI are well-known brands, which use stevia instead of sucrose to highlight the health of tea drinks.