Lycopene of the function

Lycopene is widely found in tomatoes, tomato products, watermelon, grapefruit and other fruits. It is the main pigment in ripe tomatoes and one of the common carotenoids.  In 1989, MASCIO found that lycopene had the highest quenching activity to singlet oxygen among all carotenoids.  Subsequently, studies on the function of lycopene have become a hot topic, involving the absorption and metabolism of lycopene, the reduction of the risk of various tumors such as prostate cancer and cardiovascular diseases, as well as the extraction and determination methods of lycopene.  At present, lycopene has not only been widely used as a natural pigment, but also has been increasingly used in functional food, medicine and cosmetics. 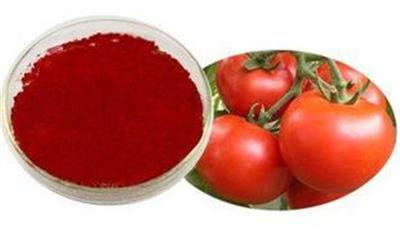 Lycopene is an unsaturated alkene compound, which is the main pigment in ripe tomato and one of the common carotenoids.  Lycopene does not have the β -angelicone ring structure of β -carotene, so it cannot be transformed into vitamin A in the body, and is not A provitamin A.  The molecular formula is C40H56, and there are many cis-trans isomers.  Lycopene is a fat soluble substance, insoluble in water, methanol, ethanol, soluble in ether, petroleum ether, hexane, acetone, soluble in chloroform, carbon disulfide, benzene and other organic solvents.  There are 11 conjugate double bonds and 2 non-conjugate double bonds in lycopene molecule, so its stability is very poor, and it is easy to occur cis-trans isomerism and oxidative degradation.  Factors affecting the stability of lycopene include oxygen, light, heat, acid, metal ions, oxidants and antioxidants.

Different human studies have reported that the half-reduction period of lycopene ranges from 2 ~ 3 days to 10 ~ 33 days.  Lycopene nutritional status can generally be determined by serum lycopene concentration.  More American adults serum lycopene content between 0.42 ~ 0.47 u mol/L, but in our country and dietary structure, the European and American countries and lycopene intake differences, it is lack of lycopene content in the serum of residents in our country the system basic data, have been reported for a community of Shanghai 30 ~ 69 adults, a 92 - year - old serum samples were determined,  The average lycopene content was about 0.32μg/mL (about 0.59μmol/L).

Lycopene is mainly distributed in testis and adrenal glands in human body, and is also widely distributed in liver, adipose tissue, prostate and ovary.  Lycopene was not detected in brain tissue, suggesting that it may not be able to cross the blood-brain barrier into brain tissue.  Lycopene concentration in blood and tissue was positively correlated within a certain dose range.  Lycopene is about 50% of the carotenoids in the human body, and lycopene is one of the main carotenoids in human milk.

Lycopene has a long chain polyunsaturated olefin molecular structure, which makes it has a strong ability to eliminate free radicals and antioxidant capacity.  At present, the research on its biological effects mainly focuses on antioxidant, reducing the risk of cardiovascular disease, reducing genetic damage and inhibiting the occurrence and development of tumors.

Oxidative damage is considered to be one of the main causes of increasing incidence of cancer and cardiovascular diseases.  The antioxidant capacity of lycopene in vitro has been confirmed by many experiments. The ability of lycopene to quench singlet oxygen is more than twice that of the commonly used antioxidant β -carotene and 100 times that of vitamin E.

Lycopene can deeply remove vascular waste, regulate plasma cholesterol concentration, protect low-density lipoprotein (LDL) from oxidation, repair and perfect oxidized cells, promote the formation of intercellular glia, and enhance vascular flexibility.  In one study, serum lycopene concentration was inversely associated with the risk of cerebral infarction and intracerebral hemorrhage.  Lycopene can effectively reduce serum total cholesterol (TC), triglyceride (TG) and low density lipoprotein cholesterol (LDL-C) levels in rabbits, and its effect is comparable to that of fluvastatin sodium.  Other studies have shown that lycopene has a protective effect on local cerebral ischemia, which mainly inhibits the activity of glial cells through antioxidant and free radical scavenging, and reduces the area of cerebral perfusion injury.

Lycopene also has functions such as reducing skin exposure to radiation or ultraviolet (UV) radiation.  When UV irradiation is applied to the skin, the lycopene in the skin combines with the free radicals produced by UV irradiation to protect the skin tissue from damage. Compared with the skin without UV irradiation, the content of lycopene is reduced by 31% to 46%, while the content of other components is almost unchanged.  Studies have shown that eating lycopene rich foods can combat UV and avoid erythema caused by UV exposure.  Lycopene can also quench free radicals in epidermal cells and have obvious discoloration effect on aged spots.

Lycopene can activate immune cells, protect phagocytic cells from oxidative damage, promote the proliferation of T and B lymphocytes, stimulate the function of effector T cells, promote the production of some interleukin and inhibit the production of inflammatory mediators.  Studies have found that moderate doses of lycopene capsules can improve human immunity and reduce the damage of acute exercise on the body's immunity.