Schisandra is the dried and mature fruit of Schisandra of Magnoliaceae, and is commonly called "Northern Schisandra". Schisandra is a commonly used traditional Chinese medicine in clinical practice. It is the main component medicine of the classic prescription Shengmai San and the modern preparation Shengmai injection. It is used to expand blood vessels, protect myocardium and increase coronary blood flow. The 2015 edition of "Chinese Pharmacopoeia" contains schisandra. There are 100 prescription preparations, which are often used in combination with Rehmannia, Ophiopogon and Poria. In addition, it is also made into health food for improving sleep, immune regulation, and auxiliary protection against chemical liver damage.

The sweet and sour taste of Schisandra has the effect of astringent and firm astringency, can condense sweat and relieve cough, and the acidity and sweetness can reduce yin, so it can produce body fluid and quench thirst. Clinically, Schisandra can be selected for respiratory infections, chronic coughs, dry coughs, dry coughs caused by lung infections. For example, Ginseng Wuweizi Decoction can be used to treat spleen deficiency syndrome after repeated respiratory infections. After treatment, the patient's white blood cell (WBC) decreased significantly, hemoglobin (HB) increased significantly, and the clinical symptoms were significantly improved. Shenqi schisandra tablets can invigorate the spleen and replenish qi, and have significant effects on spontaneous sweating and night sweats caused by deficiency of both qi and blood and lung and spleen qi. 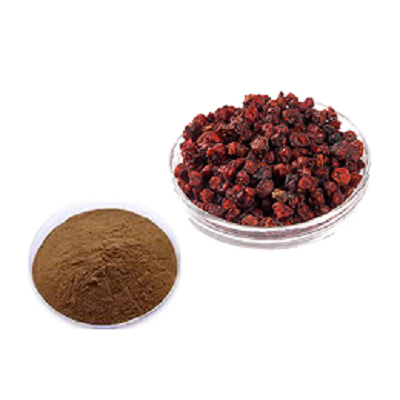 In addition, schisandra plays an important role in the treatment of liver disease and diabetes. Traditional Chinese medicine schisandra decoction can significantly improve the clinical symptoms of flank pain, backache, night sweats and so on in patients with drug-induced liver injury. Fructus schisandra extract can significantly increase the concentration of tacrolimus (Tac) in the blood of liver transplant patients, prevent transplant rejection, improve liver function, and reduce side effects such as diarrhea caused by Tac. Clinical observations show that the addition of Schisandra chinensis on the basis of conventional treatment can significantly reduce the patient's blood lipid level and glycosylated hemoglobin, and has a significant effect on the treatment of type 2 diabetes.

Schisandra is an economic crop with the same medicine and food, and is currently widely used in the fields of medicine and food. my country has successively developed traditional Chinese medicines such as ginseng deer antler pills, ephedra cough pills, and Zaoren soothing liquid with schisandra as the main raw material. In addition, there are also a series of health products using schisandra extract lignans, schisandra polysaccharides, and schisandrin as raw materials. There are also many kinds of drinks, such as schisandra wine. Schisandra is rich in nutrients, low in toxicity, rich in raw materials, extensive in pharmacological effects, and has high development and utilization value.