Seabuckthorn oil with many effects

Seed oil of seabuckthorn, as a raw material of health food, has been widely used in anti-oxidation, anti-fatigue, liver protection, lowering blood lipid and so on.

Seed oil of seabuckthorn, as a medicinal raw material, has obvious biological effects, strong anti-infection, fast healing, is widely used in the treatment of burns, scald, frostbite, knife wounds and other aspects.  Seed oil of seabuckthorn has a good and stable effect on tonsillitis, stomatitis, conjunctivitis, keratitis and gynecological cervicitis.

Seed oil of seabuckthorn is a complex of multivitamins and bioactive substances.  It can nourish the skin, promote metabolism, anti-allergy, sterilization and anti-inflammation, promote epithelial cell regeneration, have a repairing effect on the skin, can maintain the acid environment of the skin, with strong permeability, so it is also an important raw material for beauty and skin care. 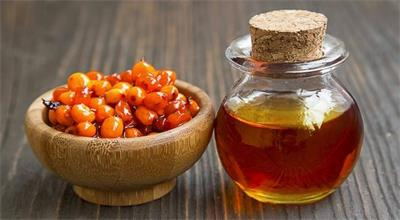 The content of VC of sea buckthorn ranks the first among all fruits and vegetables, and is known as the "King of VC".  VC is a natural whitening agent in the body, which can effectively inhibit the deposition of abnormal pigment on the skin and the activity of tyrosinase, and help the reduction of dopamine pigment (tyrosine into the intermediate of melanin), thereby reducing the formation of melanin and effectively whitening skin.

The total flavonoids and other bioactive components of sea-buckthorn have different degrees of ability to regulate the multiple links of the immune system, and have obvious regulatory effects on humoral immunity and cellular immunity, and effectively resist allergy and invasion of diseases.

Brain health, promote the growth and development of children

To protect the liver

Organic acids such as malic acid and oxalic acid contained in sea-buckthorn can alleviate the toxic effects of antibiotics and other drugs and effectively protect the liver.  Phospholipid compounds in sea-buckthorn, such as lecithin, are highly bioactive components, which can promote cell metabolism, improve liver function, and resist fatty liver and cirrhosis.  In addition, sea-buckthorn oil has obvious protective effects on heart, liver, lung and bone.

Seabuckthorn contains a large number of amino acids, organic acids and other nutrients, as well as phenolic compounds, which can promote the biosynthesis of gastric acid and stimulate the secretion of gastric juice.  Therefore, sea-buckthorn has the function of digestion and stagnation, invigorating spleen and stomach, dredging liver and benefiting qi.  For dyspepsia, abdominal distension pain, gastritis, stomach and duodenal ulcer, enteritis, chronic constipation and so on have very good effect.

Seabuckthorn in traditional medical theory has the effect of relieving cough, relieving asthma, promoting lung and reducing phlegm, and has a good effect on chronic pharyngitis, bronchitis, sore throat, asthma, cough sputum and other respiratory system diseases. Its main effect is related to the anti-inflammatory effect of flavonoids in Seabuckthorn and the promotion of capillary blood circulation.

The bioactive components of sea-buckthorn, such as anthocyanin, abritin, coumarin and 5-hydroxytryptamine, have obvious anticancer activity and anti-tumor effect.  It has certain inhibitory effect on cancer cells in human body, and also has the effect of blocking carcinogenic factors.  Moreover, it can improve the autoimmune function of cancer patients, enhance the resistance to cancer, reduce the toxic effect of radiotherapy and chemotherapy, and promote the recovery of cancer patients.

The synergistic effect of sea-buckthorn flavonoids and VC can reduce the content of triacylglycerol and harmful low density lipoprotein in blood, increase the content of good high density cholesterol (HDL), increase the excretion of cholesterol and lipid, and play the role of fat elimination.  The multivitamins and carotenoids in sea-buckthorn can effectively regulate the metabolism of human fat and have a good effect on simple obesity.