English
Home / News / The function and mechanism of Trypsin

The function and mechanism of Trypsin

Trypsin,an enzyme in the first part of the small intestine,begins digesting protein molecules by cleaving these long chains of amino acids into smaller fragments.It is a serine protease of the PA clan superfamily that is present in the digestive system of many vertebrates and hydrolyzes proteins.Trypsin is formed in the small intestine when its zymogen form (trypsinogen produced by the pancreas) is activated.Trypsin cleaves peptide chains primarily at the carboxyl side of the amino acids lysine or arginine.It is used in many biotechnological processes.The process is commonly called tryptic proteolysis or trypsinization and proteins that have been trypsinized/treated are said to have been trypsinized.Trypsin was discovered by Wilhelm Kühne in 1876 and named after the ancient Greek word for rub, since it was originally isolated by rubbing the pancreas with glycerol.

In the duodenum,trypsin catalyzes the hydrolysis of peptide bonds, breaking down proteins into smaller peptides.The peptide products are then further hydrolyzed by other proteases into amino acids,making them available for absorption into the bloodstream.Trypsinization is a necessary step for protein absorption because proteins are usually too large to be absorbed through the lining of the small intestine.Trypsin is produced in the pancreas as the inactive zymogen trypsinogen.When the pancreas is stimulated by cholecystokinin,it is secreted through the pancreatic duct into the first part of the small intestine (duodenum).Once in the small intestine, enterokinase (also known as enteropeptidase) activates trypsinogen to trypsin by proteolytic cleavage.Trypsin then activates additional trypsin, chymotrypsin and carboxypeptidase. 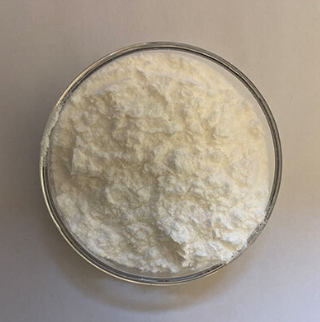 The enzymatic mechanism is similar to other serine proteases.These enzymes contain a catalytic triad consisting of histidine 57, aspartate 102, and serine 195.This catalytic triad was formerly known as the charge-relay system, implying the extraction of protons from serine to histidine and from histidine to aspartate,but since NMR provided evidence that the resulting serinol.The salt form has a stronger pull on protons than the imidazole ring of histidine,contrary to current thinking,serine and histidine each have an effectively equal share of protons with which they form short, low-barrier hydrogen bonds.In these ways, the nucleophilic serine at the active site increases,facilitating its attack on the amide carbon during proteolysis.The enzymatic reaction catalyzed by trypsin is thermodynamically favourable,but requires a large amount of activation energy (it is "kinetically unfavorable").In addition, trypsin contains an "oxyanion cavity" formed by the backbone amide hydrogen atoms of Gly-193 and Ser-195, which stabilizes the negative charge accumulated on the amide oxygen after nucleophilic attack on the planar amide carbon by hydrogen bonding.The serine oxygen causes the carbon to assume a tetrahedral geometry.This stabilization of this tetrahedral intermediate contributes to the lowering of the energy barrier for its formation, with a concomitant decrease in the free energy of the transition state.Preferential binding of transition states is a key feature of enzyme chemistry.The negative aspartic acid residue (Asp 189), located in the trypsin catalytic pocket (S1), is responsible for attracting and stabilizing positively charged lysine and/or arginine, and thus the specificity of the enzyme.This means that trypsin cleaves proteins primarily on the carboxyl side (or "C-terminal side") of the amino acids lysine and arginine,unless either of these binds the C-terminal proline, although large-scale mass spectrometry data suggest that Cleavage occurs even with proline.Trypsin is considered an endopeptidase, i.e. cleavage occurs within the polypeptide chain rather than at the terminal amino acid located at the end of the polypeptide.

Human trypsin works optimally at approximately 37°C. In contrast, Atlantic cod has several trypsins for ectothermic fish to survive at different body temperatures.Cod trypsin includes trypsin I, which has an activity range of 4 to 65 °C (40 to 150 °F), with a maximum activity at 55 °C (130 °F), and trypsin Y, which has a range of 2 to 30 °C (36 to 86 °F) and 21 °C (70 °F) for maximum activity.As a protein, trypsin has different molecular weights depending on the source.For example, trypsin from bovine and porcine sources has been reported to have a molecular weight of 23.3 kDa.Trypsin activity is not affected by the enzyme inhibitor tosylphenylalanyl chloromethyl ketone TPCK, which inactivates chymotrypsin.Trypsin should be stored at very cold temperatures (between -20 and -80 °C) to prevent autolysis, which may also be hindered by storing trypsin at pH 3 or using reductively methylated trypsin.Activity was restored when the pH was adjusted back to pH 8.

Proteolytic cleavage of trypsinogen in the pancreas activates trypsin,leading to a cascade of events leading to pancreatic autodigestion, resulting in pancreatitis.One of the consequences of the autosomal recessive disorder cystic fibrosis is insufficient transport of trypsin and other digestive enzymes in the pancreas.This can lead to a condition called meconium ileus, which involves intestinal blockage (intestinal obstruction) due to thickened meconium, which is usually broken down by trypsin and other proteases and then passed out with the stool.

Trypsin is abundant in the pancreas and can be purified fairly easily.Therefore, it has been widely used in various biotechnological processes.

In tissue culture laboratories, trypsin is used to resuspend cells that adhere to the walls of cell culture dishes during cell harvesting. Some cell types adhere to the sides and bottom of culture dishes when cultured in vitro.Trypsin is used to cleave the proteins that hold cultured cells to the dish so that the cells can be removed from the dish.Trypsin can also be used to dissociate isolated cells (e.g., prior to cell fixation and sorting).

Trypsin can be used to break down casein in breast milk.If trypsin is added to the powdered milk solution, the breakdown of the casein will turn the milk translucent. The reaction rate can be measured by using the amount of time it takes for milk to become translucent.Trypsin is commonly used in biological research during proteomics experiments to digest proteins into peptides for mass spectrometry analysis, such as in-gel digestion.Trypsin is particularly suitable for this because it has a very well-defined specificity as it only hydrolyzes peptide bonds where the carbonyl group is contributed by an arginine or lysine residue.Trypsin is also used to dissolve blood clots in the microbial form and to treat inflammation in the pancreatic form.In veterinary medicine, trypsin is an ingredient in wound spray products such as Debrisol, which dissolves dead tissue and pus from wounds in horses, cows, dogs, and cats.