English
Home / News / What diseases does shikimic acid have a therapeutic effect on?

What diseases does shikimic acid have a therapeutic effect on?

Shikimic acid is an unsaturated carboxylic acid containing multiple hydroxyl groups. It has an odorous acid. It is a white powder at room temperature; it is hardly soluble in chloroform, benzene and petroleum ether; its melting point is between 185°C and 191°C. 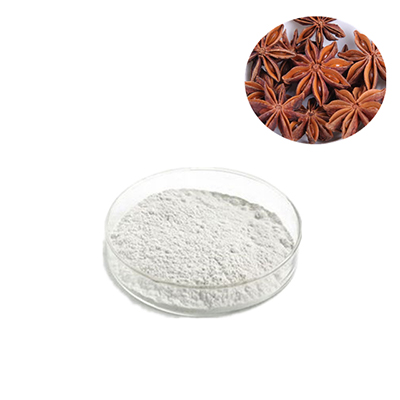 Shikimic acid has weak acidity and can react with a variety of active bases, basic oxides, metals and salts (carbonate and bicarbonate) to form unstable salts; it also has the properties of polyols and alkenes , Can occur intramolecular dehydration reaction, can also occur addition reaction with bromine; under certain conditions, it can undergo esterification reaction with oxyacid or alcohol.

There are many ways to obtain shikimic acid, which can be extracted from the fruit of star anise, or artificially synthesized by chemical synthesis, or synthesized by microbial engineering bacteria. As an important pharmaceutical and chemical raw material, shikimic acid can be used in the treatment of many diseases:

1. Shikimic acid can be antibacterial and anti-tumor

In 1987, Japanese scholars discovered that analogs of glyoxalase I inhibitor synthesized from methyl shikimate had a significant inhibitory effect on HeLa cell line and Eichli ascites cancer, and could prolong the survival time of mice inoculated with leukemia cell L1210 , And relatively low toxicity, its inhibitory effect is mainly related to the hydrosulfide reaction. In 1988, Chinese scholars have synthesized a shikimic acid derivative and proved that this compound has the effect of inhibiting L1210 leukemia cells in vitro.

The effect of shikimic acid and its derivatives on the cardiovascular system is manifested in its anti-thrombosis and inhibition of platelet aggregation.

Studies have shown that: shikimic acid has a strong inhibitory effect on the platelet aggregation rate of adenosine diphosphate-induced middle cerebral artery embolism model rats; intravenous and intramuscular injection of shikimic acid can prolong the blood clotting time of mice.