Bacteria are often regarded as bad things by people, but in fact they can also benefit mankind. For example, there is something called xanthan gum, which is a polysaccharide secreted by bacteria and has become a food additive widely used in the food industry.

In the 1950s, the United States studied a bacterium called "Xanthomonas campestris", which is harmful to cabbage and alfalfa and can cause black rot. Scientists unexpectedly discovered that it can convert cabbage extract into a viscous substance, which is xanthan gum.

Xanthan gum, also called xanthan gum, is a polymer polysaccharide with special physical and chemical properties. For example, it has a double helical structure and its chemical properties are very stable. It is difficult to degrade it by ordinary protease, amylase, cellulase, hemicellulase, etc. It is not sensitive to acid, alkali, salt, and temperature, and it can be dissolved. In cold water and hot water, it can adapt to different application environments.

Xanthan gum was mainly used in the oil drilling industry in the early years, and only 30% was used in food. In the 1970s, its main use has shifted to food, accounting for 60% to 70% of the total output. In 1969, the US FDA took the lead in approving xanthan gum as a food additive. In 1988, my country also approved xanthan gum as a food additive. Its safety is very high, so it can be used in all kinds of food as needed, generally without limit.

Not afraid of heat. Many thickeners will reduce their viscosity or even fail completely at high temperatures, but the viscosity of xanthan gum will hardly change from 10°C to 80°C. Repeated freezing and heating from -4°C to 93°C will hardly affect the viscosity. . Therefore, it can be used in products that need to be warmed, such as fruit juice drinks, pulp drinks, milk drinks, vegetable protein drinks and so on. The benefits of using xanthan gum in pulp beverages are the most obvious, which can extend the suspension time of the pulp. Xanthan gum is used in milk beverages and vegetable protein beverages to avoid fat stratification and protein precipitation. Some porridge shops also add xanthan gum, so that it only takes a short time to make a very thick porridge, and of course it tastes no problem. 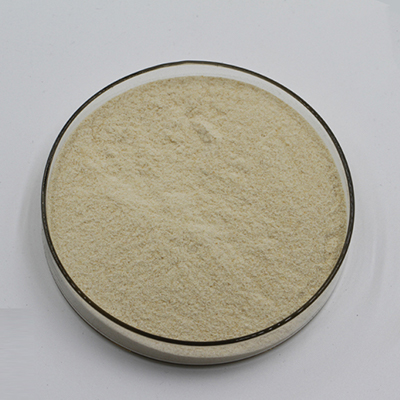 Not afraid of acid, alkali and salt. Under the action of acid, alkali and salt, the molecular structure of many thickeners will change and lose their thickening effect. But xanthan gum is not afraid of these, even 10% salt water can not help it. For example, the traditional process of soy sauce and oyster sauce uses starch to thicken, but the starch is easy to precipitate and agglomerate after being stored in a high-salt environment for a period of time. Using xanthan gum can not only overcome these problems, but also improve the wall-hanging and coloring properties of soy sauce and oyster sauce, and extend the shelf life. In addition, xanthan gum is also widely used in condiments such as jam, bean paste, salad dressing, etc. It not only has a long shelf life, but is also easy to spread, and has a smoother taste.

Combination of dynamic and static Xanthan gum has a characteristic called "pseudoplasticity", that is, the viscosity is very large in the static state, but the viscosity decreases rapidly in the stirring or flowing state, and once the movement is stopped, the viscosity will be restored. For example, adding xanthan gum to ice cream and ice cream. The raw material is a paste with low viscosity during the process of processing and canning. The viscosity will be restored after a little cooling and standing, so that large ice crystals are not easy to form in the ice cream, and the taste is naturally smooth and fine. , At the same time, the product will not flow all over after it has melted. Therefore, the processing of jelly, canned food, cream products, chocolate, soft candy, toothpaste and other products can also take advantage of this feature.

Retaining moisture Xanthan gum has the ability to "lock water". The addition of xanthan gum to baked goods such as breads and cakes can make the pores in the product uniform and elastic, help maintain moisture and soft taste, and extend the shelf life. The addition of xanthan gum to quick-frozen dumplings, chaos, and glutinous rice balls can help reduce water loss and cracking, and can reduce the rotten skin and soup during the cooking process. The addition of xanthan gum to the filling can bring a juicy taste. Xanthan gum is used in meat products such as braised pork and ham, which can increase the taste and tenderness by increasing moisture. Xanthan gum can also be used for surface treatment of fruits and vegetables to reduce water loss and oxidative browning. Adding xanthan gum to noodles, ramen noodles, and instant noodles can reduce breakage during processing, and the noodles are more chewy and smooth in the mouth. It can also reduce oil absorption when instant noodles are fried. In addition, it is widely used in sunscreen, skin care, and water-retaining cosmetics.

In fact, there are many uses of xanthan gum, for example, it is used in diet food. Because it is a water-soluble dietary fiber, it can provide a certain sense of fullness, but because the human digestive enzymes cannot destroy it, it will not provide energy. In addition, it can be used in microencapsulation technology and is an important component in the production of sustained-release drugs. In short, xanthan gum can be used in daily chemical, food, medicine, petroleum exploration, textile, ceramics, printing and dyeing and other fields. I am afraid that the scientist who discovered it did not expect that the secretion of this bacteria is so magical.